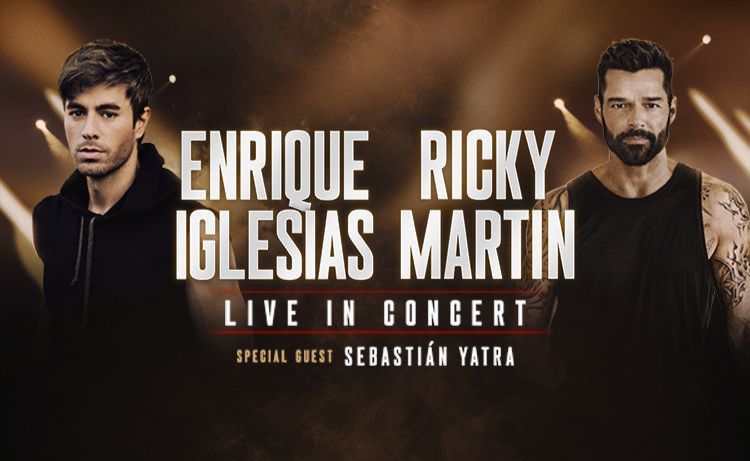 GRAMMY Award-winning, multi-platinum powerhouse artists Enrique Iglesias and Ricky Martin are hitting the road together for the first time ever. The global superstars have built unstoppable solo careers with dozens of #1 songs and millions of albums between them, and are now joining forces live in concert this fall. Fans can expect to hear renowned hits from two of the biggest names in pop and Latin music on their historic North American arena tour. Latin music's newest sensation Sebastián Yatra will join the outing as special guest. The GRAMMY nominee has become one of the most powerful Latin pop artists of his generation.

Both artists will continue taking care of longstanding fans with their own exclusive fan presales making sure hardcore followers have access to amazing seats as well.

Enrique and Ricky have created some of pop music's most memorable songs for decades and their combined list of chart-toppers is seemingly endless. Enrique gained devoted fans around the world with songs including"Hero," "Escape," "Bailando," "Tonight," and more recent hits "Subeme La Radio" and "Duele El Corazon" with a new album to be released later this year. Ricky's solo career exploded with  "The Cup of Life" and "Livin' La Vida Loca," followed by"She Bangs,"  "Vente Pa' Ca,"  and his most recent "Tiburones"  from his upcoming 2020 studio album. The two will perform a worldclass setlist of their top hits when the tour kicks off this September.

Special guest Sebastián Yatra made his mark on Latin pop with the album Fantasia, which debuted at #1 on Billboard's Latin pop album chart. He received a 2020 GRAMMY Nomination for "Best Latin Pop Album" along with two Latin American Music Awards and four Latin GRAMMY Awards nominations.