SAN JOSE, Calif (July 27, 2018) --  SAP Center at San Jose (@SAPCenter), the premier sports and entertainment venue in Northern California, today announced plans for a year-long celebration to commemorate 25 years of bringing world-class events to Silicon Valley.  Included in the festivities will be multiple celebratory events including an exclusive, invitation only dinner to be held on September 14, 2018, a year-long concert series, and an indoor/outdoor three-day music festival planned for 2019.  With the generous support of SAP, the naming rights partner for the venue, additional events, such as a series of public street parties, will be announced later this year.

“Since 1993, SAP Center at San Jose has been the place to be and be seen in San Jose, bringing world-class entertainment - as well as the country’s top sporting events - to the South Bay,” said Sharks Majority Owner Hasso Plattner.  “We take great pride in the undeniable positive impact this entertainment venue has made on this city and to the residents of San Jose.  We look forward to many more years of bringing the world’s best entertainment to SAP Center at San Jose.” 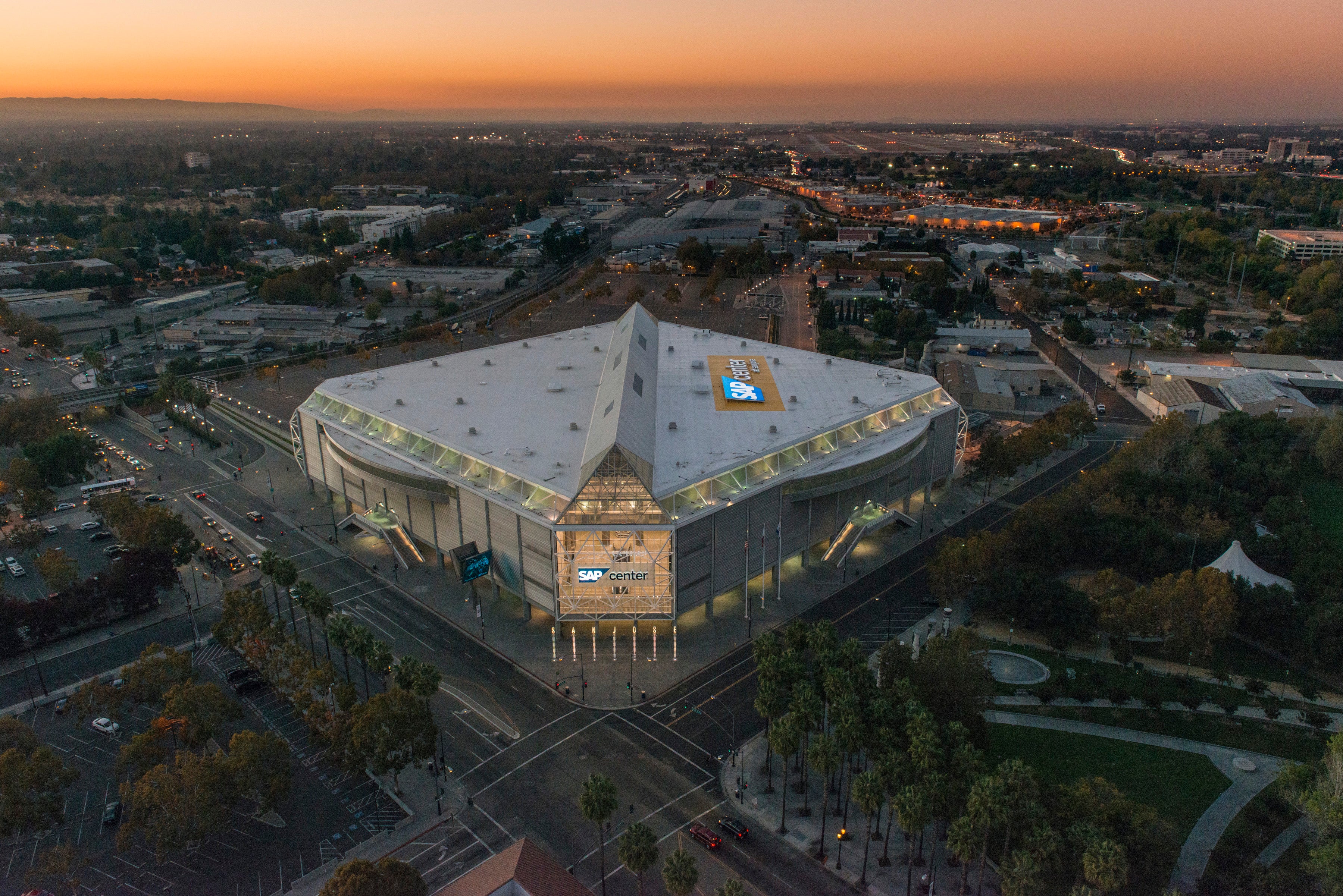 At a media event in May 2015, Plattner, San Jose Mayor Sam Liccardo, and Sharks President John Tortora proudly announced an extension of the lease agreement between the Sharks and the City of San Jose, paving the way for the franchise to stay in San Jose for 25 years through 2040.

SAP Center at San Jose continues to be recognized as the biggest success story in the ongoing revitalization of downtown San Jose.  Over the last ten years, SAP Center’s economic impact on the City of San Jose has been almost $4 Billion.  In 2016, the Silicon Valley Business Journal estimated that one regular season Sharks game contributes more than $2M to the local economy.  Pollstar Magazine consistently ranks SAP Center as a top venue in the United States and the world in terms of non-sports tickets sold during the past 10 years.

Home to the San Jose Sharks (@sanjosesharks) of the National Hockey League (@NHL) and the San Jose Barracuda (@sjbarracuda) of the American Hockey League, SAP Center opened its doors on September 7, 1993 when the Ringling Brothers & Barnum and Bailey Circus performed the first event in the brand new, state-of-the-art facility.  Since that time, the venue has hosted many of the biggest names in the entertainment industry including Katy Perry, Paul McCartney, Adele, The Rolling Stones, Bruce Springsteen, Barbra Streisand, Bob Dylan, Beyonce, Elton John, Garth Brooks, Jay-Z, The Three Tenors (Placido Domingo, Luciano Pavarotti and Jose Carreras), Madonna, Lady Gaga, Prince, Los Tigres Del Norte, The Eagles and U2.  Since 1990, 23 of the top 25 live touring acts have performed at SAP Center.

SAP Center will also launch a social media campaign to capture our fans’ favorite memories from the last 25 years. The grand prize winner will receive tickets to the 2019 NHL ®All-Star Game as well as the SAP Center 25 Years Music Festival in 2019. Please find more info at www.sapcenter.com/25Years.

With its distinguishing 10-story glass pyramid entry and unique stainless steel façade, the facility has provided a distinct identity for the City of San Jose for 25 years. Located in the heart of Silicon Valley, SAP Center is an exemplification of the architectural excellence and technological innovation that defines the area. 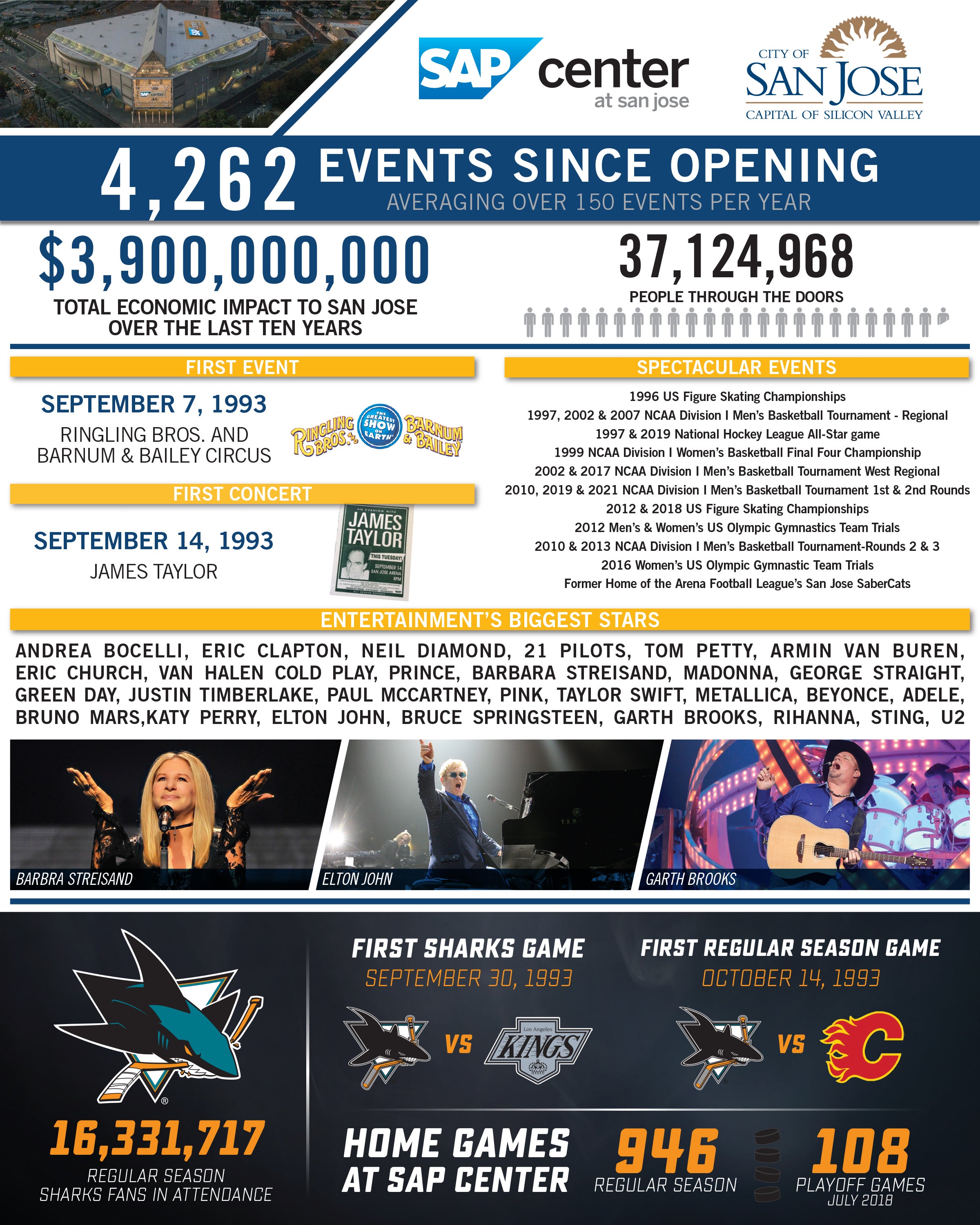